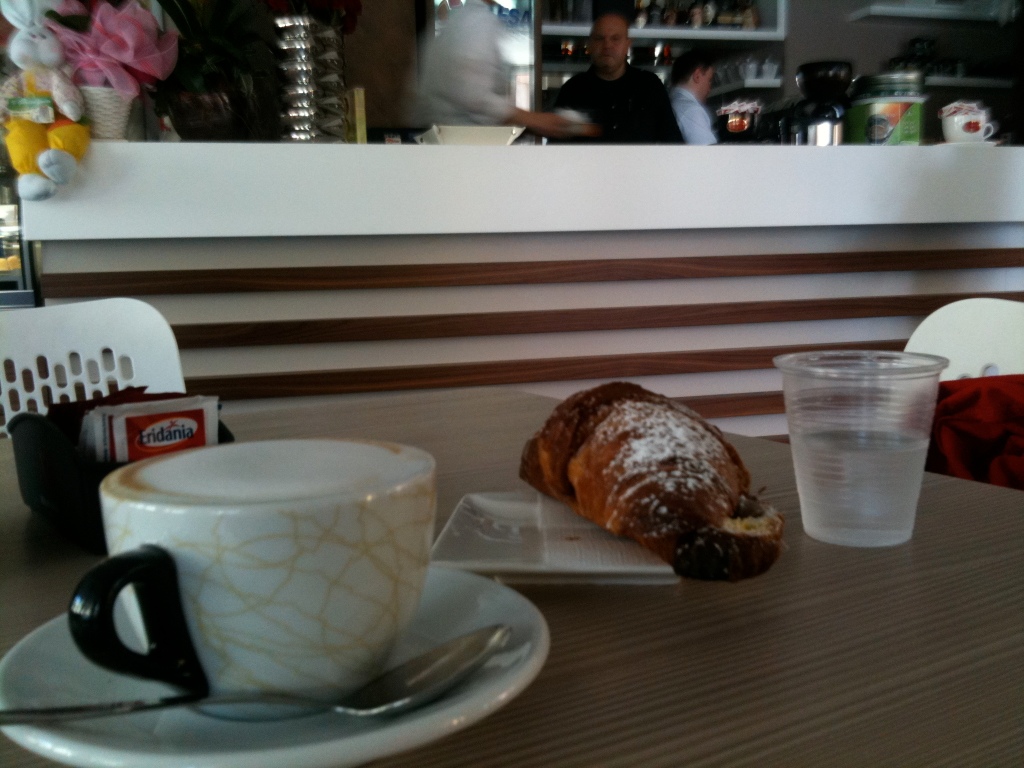 Cafe Blanco ought to have been called Cafe Bianco, because the interior is so white it seems the ideal spot for a wedding, the bride and groom exchanging vows in between sips of cappuccino and bites of cornetto, the young barman with his black apron and white collared shirt could officiate, if he didn’t then abscond with the bride leaving the groom standing amidst cornetti crumbs at the bar. No no, better have one of the older gentlemen behind the bar officiate, perhaps the owner, dressed entirely in black for the occasion, serving a deliberate contrast with the white theme and clothing he’s mandated his employees wear. He also wears no apron, meaning he might not be suited to the sometimes dirty work of marriage officiating, but more likely to waiting in the wings a month or year down the line when one of the two decides they just can’t bear the sight of the other anymore and comes to him in hopes of making the split as amicable as possible. But I’m getting ahead of myself, the bride and groom haven’t even finished their cappuccinos so rather than sound patronizing, I’d do better to ask them for their thoughts before their senses get overwhelmed by all that “marital bliss” and excess sentiment.

They don’t see me come up to their table, eclipsed as I am by the swirling possibilities they’ve found in each other eyes, a cruel irony as even the most timid observer wouldn’t hesitate in saying that this isn’t going to last, his affairs and her expenditures will grate on the other soon enough, rendering each unable any longer to see or understand the other, but that time has yet to arrive so I ask them the following questions, temporarily interrupting their dreaming.

“What do you think of the cappuccinos?”

They turn, noticing for the first time my presence at the table as I pull up a seat.

“And the chocolate cornetti? How are they?”

“Delicioso!” The bride pipes in.

Hmmm, perhaps they’re not the most objective critics, I see that sixty sugar packets are empty between the two of them, unaware that this sensation will give way to eventual bitterness once they reach the bottom of the glass.

Indeed, in six months they’ll tell me when I approach them on the other end of their marriage that the cappuccinos were too bitter, the cornetti overly baked and the chocolate nothing but nutella from a jar, nutella that’s long since reached its expiration date.

This too, isn’t an accurate depiction, so we have to read somewhere between the lines. The cappuccino, made with Valentino coffee which was so full of innocence and meaning to these lovers when things were good, now serves as a cruel reminder of their naïveté.

As for me, Valentino coffee isn’t as good as some of the other varieties served, notably Vergnano, and the cappuccino likewise isn’t the best you’ll find in this part of Italy, I can tell you three or four better to be had in this city alone, rendering this one not quite worth the twenty minutes it’ll take you to get here from the center. The cornetto too, is likewise decent, I’d render it as better than the cappuccino actually, but still it fails to reach the heights of the cornetti at Roma and del Corso.

Nevertheless, if you happen to be out this way, heading to the reception on the sandy beaches of Capitolo, Cafe Blanco is worth a visit. Even if you’re not satisfied, you can always go somewhere better for the honeymoon… before the two of you start heading south.

Opening times As this is Italy, my putting up the hours would be pointless. Opening and closing times are completely up to the whim of the owner. Being closed on Tuesday is something you can take to the bank… though preferably not an Italian one.