All of which to say, I love Vienna. How could you not delight in a place whose people consider coffee houses to be their “living rooms”? Where some of the greatest minds of the past 100 years found their inspiration?

But there’s a curious creature lurking inside the Viennese coffee house — a creature known as the “Viennese waiter”.

Viennese waiters do not like you and they’re not shy about making that fact known. If you’re an American, or used to the way that American servers prostrate themselves before your table as if you’re some kind of conquering hero, this is likely to strike you as quite strange — and grounds for typing off a one-star review on TripAdvisor.

Apparently many people have already done that, as a recent search reveals that none of Vienna’s historic coffee houses garners anything greater than a cumulative four-star review on the popular travel review site.

Cafe lover that I am, I’m making sure to visit as many coffee houses on this trip to Vienna as possible.

We start by paying a Friday night visit to Cafe Landtmann, a coffee house that’s been around since 1873 and is reputed to have been Sigmund Freud’s favorite.

Upon arrival, the doorman – yes, there’s a doorman – informs us crisply to “take a seat wherever you like”. On entering the dining room, we’re confronted with a room full of tables. Only a handful are occupied, and on the others sit silver “reserved” signs.

We claim a corner table. Since it’s less than an hour before the cafe is due to close, I doubt the 20 or so “reserved” tables are likely to be filled anytime soon.

“Please sir, in the future do us the kindness of asking before sitting at a table marked ‘reserved’”.

I stammer something about the doorman having told us to sit wherever we liked and the waiter brushes the air with his hand as if my excuse was a physical thing he was just flicking away. He then takes our order.

The next day for breakfast we visit another old coffee house, just on the outskirts of the inner city, called Cafe Jelinek.

The waiter comes up to the table barely a minute after we sit down, a minute in which we’ve barely had time to peruse the menu. I ask him for a couple more minutes. He gives us twenty.

On the wall just above the pastry case hangs a sign with a notice written in both German and English: “Sorry, we do not cater to people in a hurry.”

No sign better sums up a Viennese waiter’s attitude towards customers.

That afternoon, we hop over to Cafe Demel, in Vienna’s center.

Cafe Demel is famous not just for having been frequented by Viennese and international celebrities, such as Austria’s Empress Elizabeth, but for having been embroiled in a ten-year legal dispute with a local rival, Cafe Sacher, over which cafe had the right to refer to its cake as the “Sacher” torte.

Demel is also known for having an entirely female waitstaff, but such sisterly love doesn’t trickle down to the clientele.

Upon arriving, we stand in front of a sign marked “Wait here to be seated” for 10 minutes before finally being acknowledged by one waitress. The ordering experience is similarly accommodating.

“I’ll have a pumpkin soup, a hot chocolate, and an Eduard Sacher Torte, please,” I say, quite amiably I think.

“You can order dessert later, after food.” The waitress says, snapping the menu shut. 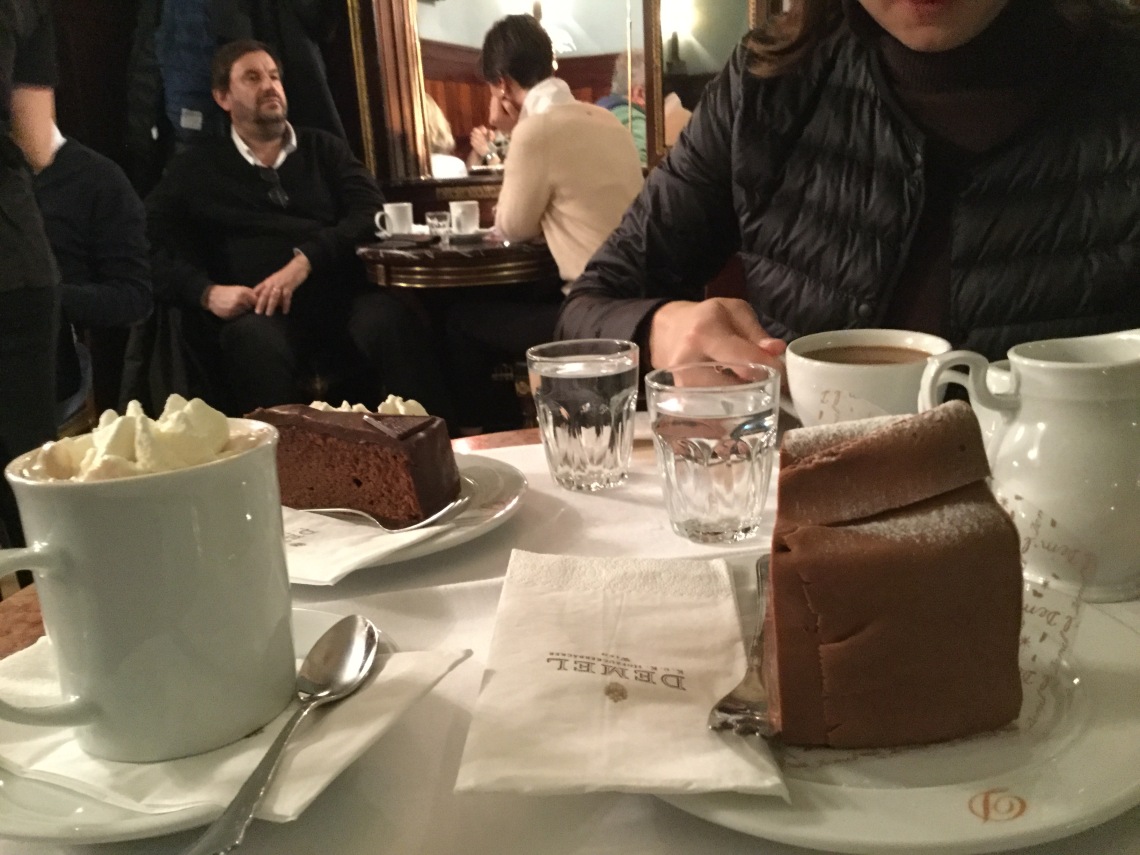 We round out the evening with a visit to the appropriately named Cafe Central, right in Vienna’s beating heart. Lenin and Trotsky used to play chess here, and thick marble columns rise up around a piano in the center of the cafe.

This is the most popular of all of Vienna’s coffee houses, as evidenced by the queue outside the door. There are two Chinese couples standing in front of us.

“Four?” The waiter says to the first couple.

“Are you sure?” The waiter asks. “I seat you together anyway.”

We’re seated next, and are quickly approached by a waiter who wants to take our order.

“Coffee Maria Theresia,” I say, quite amiably I think. “And an apple strudel.”

“And to eat?” The waiter says, not looking up from his pad.

“Just the strudel,” I say, again quite amiably.

The waiter, clearly dissatisfied, storms off. I’m brought the coffee, the strudel, and the check all at once, and he stands there until I’ve paid. Maybe if I’d ordered the schnitzel he would have liked me.

The next morning it’s time for the legendary Cafe Sperl, which I make a point of including on the itinerary due to its part in one of my favorite films, “Before Sunrise”.

As soon as we step into the Sperl, one particularly dreary Monday morning, the middle-aged waitress eyes us suspiciously.

“Can we have a table for two, please?” I say, quite amiably I think.

“You can look around you,” she says, gesturing with her hands. “And seat yourself.”

“The cook made your eggs over easy,” she says by way of explanation, before stalking off.

On the sunny side, I decide that these are possibly the tastiest eggs I’ve ever eaten.

Now, you may read this and say “that sounds terrible”, and that’s what I thought too at first.

But now I feel differently. Rather than take offense at the rude service of Vienna’s waitstaff — the way I did in Vienna on a previous occasion when a waiter told me to “go to the Christmas market” after I asked whether the restaurant served mulled wine — I now find the commonly quite rude service to be a distinguishing characteristic of a city I love.

Have I become a masochist? Am I just that self-loathing? No … or at least, I don’t think so — even though I do need to lay off the cake. But rather, it’s that after having done time as a waiter myself, I look at the Viennese waiter as a revolutionary of sorts — an upraised fist against the notion that “the customer is always right”.

Theirs is a refusal to give in to the era of TripAdvisor and don a more polite, but false, facade but to instead remain unrepentantly authentic. Or, at least, authentically Viennese.

It’s as historical as these Viennese coffee houses themselves, and it’s remained the same all these years. That’s something to celebrate, even if you’re on the receiving end of it.